” The ground is frozen, the snow is staying instead of melting, and the general population is acting like they have never driven in snow before.

Winter is in full force here in Michigan with the warm temperatures experienced last week replaced with inches of snow, strong north winds, and

wind chill well below freezing. For fishing this is a good thing. Due to the weird weather that we have experienced this year

*cough* – due to global warming – we have had a lot of rain when we didn’t want it and a dry spell when we needed rain the most.

with a lot of confused steelhead wondering “should we stay out in the big lake?” or “should we run into the rivers?”. The urge steelhead

and salmon get to move into the many of rivers, streams and creeks connected to the Great Lakes is comprised of two major factors:

ignoring how shallow a creek or river may be if it is the right temperature to run up into, sometimes scraping their bellies and fins up in the process.

A prime example being almost any stream or creek in Indiana, as they fill up with a summer strain of steelhead in the hot months when

the water levels are lowest, leaving steelhead with inches of room to maneuver. The month of November brought plenty of rain that many

of people were hoping would turn to snow, mixed with a lot of warm winds, making fishing conditions range from shitty to unfishable with very few

fair-weather fishing days. This cold snap that we just got mixed with the rain that eventually turned to snow should not only bring fish into the system

but force the all the fish into their deeper winter lies in the river.

Lately I have gotten a few chances to get out and fish – albeit only ever in the shitty conditions – and have compiled a small list of tips:

1. NYMPH WITH NYMPHS. After months of throwing egg patterns, maybe try using a few more nymphs these days, just to spice things up. Steelhead are just big trout at heart and the longer they are in a river, the more they revert to their trout-like tendencies, making them more wary and selective with their food.

2. To catch steelhead while indicator fishing you don’t have to be a great fisherman nor caster. You simply need to be a good drifter. Learn to stack mend. And then master it. Your fly being drug down the river by line all day is exactly how to guarantee a day’s worth of disappointment.

4. When your boss hands you a dead grouse, tie flies with its feathers. Or leave it in a bag in your boat to freeze. Your choice.

5. Photos taken of steelhead account for %40 of frostbite cases in Michigan.

7. Boat plugs can and will freeze and pop out.

With the arrival of snow of comes consistently cold temperatures, leaving fishing as more of a mission to some people than a relaxing hobby, meaning there are a lot less people out fishing, meaning a lot less pressure on the river. And right now, on the PM (Pere Marquette), it is very peaceful. One of Michigan’s most highly pressured rivers, especially for it’s size, is finally resting from a salmon season that that was hectic to say the least, with a run of fish that shocked us not only with how large the fish were this year but by how long and healthy the run was, as the last few years Michigan rivers have been plagued by runs that were abnormally small, leaving salmon fishing opportunities sparse. These days worn paths along the river in the dirt are replaced by snowy riverbanks. There are one or two boats on the river a day versus the twenty or more we are accustomed to seeing. The fish aren’t pressured like they usually are, leaving them a little more apt to bite. Winter fishing is of course never a super productive time of the year, but more importantly than the amount of fish you catch these days is the quality of fish and the reward of enduring the cold to get a fish or even a simple tug on some days. Some days the snow looks gorgeous and the sun is out, eager to play in the trees, throwing shadows on the glistening snow, and the rest of the weather cooperates. On other days it will be 1 degree with wind chill, sleeting, and you forgot your gloves on the dash of your car. “

Things in the shop have been slowing down, giving me some extra time to work on refilling my fly box and make some fly tying videos along with others chronicling my fishing adventures. I am currently starting a YouTube channel, West Side Fly Guy. Look for some new content in the future! 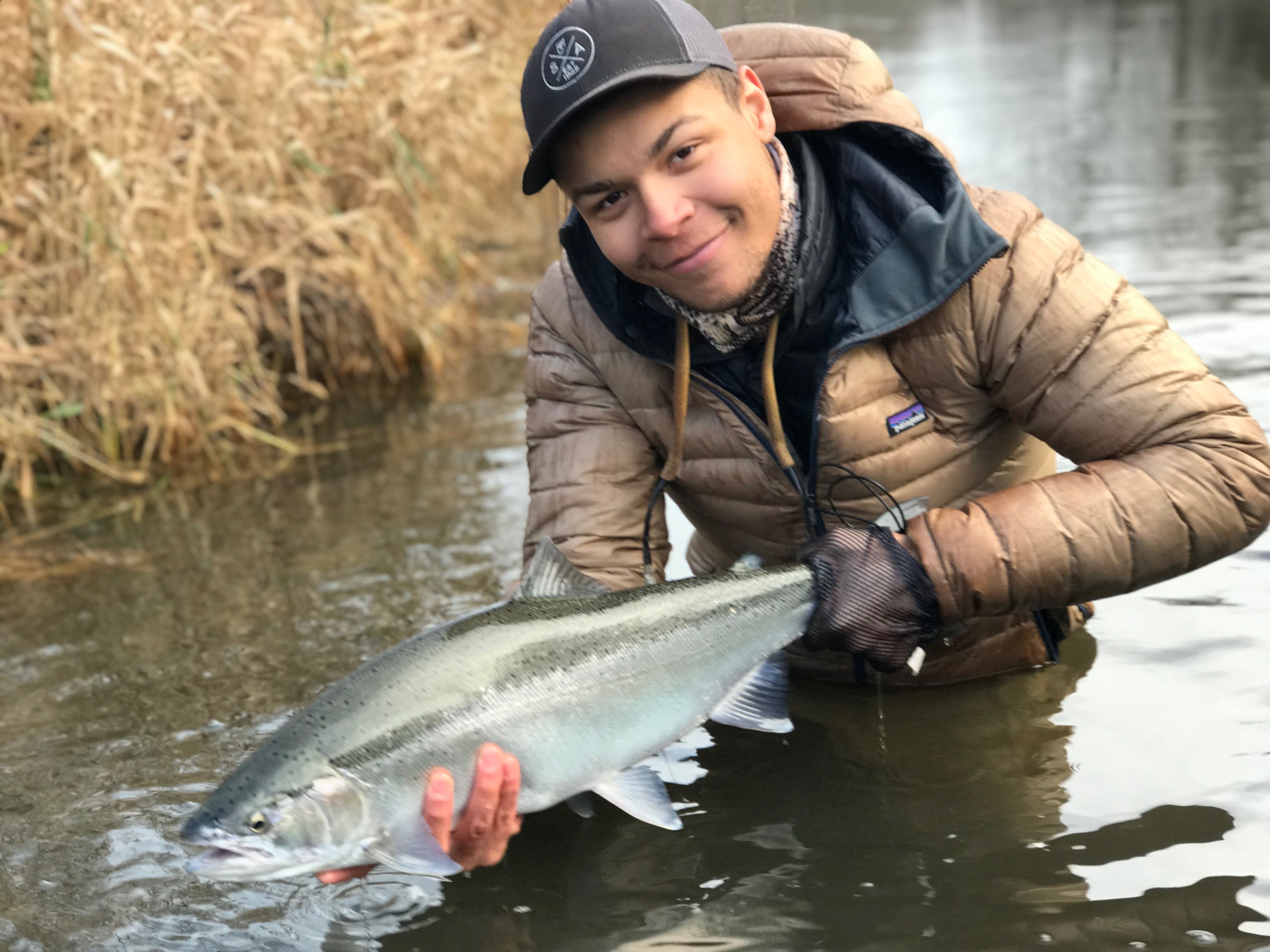 Westley is our newest shop employee, originally from Frankfort, Michigan. Westley has spent nearly the last decade enjoying all that Michigan has to offer when it comes to fishing. From chasing Brook Trout in the Upper Peninsula on a dry fly, to swinging streamers for steelhead and browns, and chasing Kings off the piers, he has honed his fishing abilities and hopes to be the newest guide on the block. If Westley isn't in the shop working he is either tying flies or out fishing somewhere. The kid never stops. A bright, sharp - both in mind and tongue - young man that everyone seems to enjoy spending time with, Westley looks to have a bright future in the fishing industry.